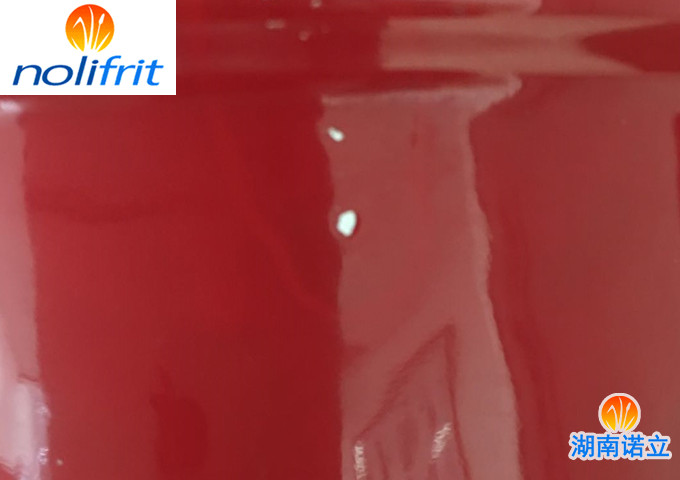 Slag-like marks on the ground coat porcelain layer. The reasons for its formation are as follows: ① Due to the low density of the enamel slurry, the soft ground coat, uneven coating, and over-firing, the porcelain layer is too thin and scorched. ② Excessive melting of the ground coat (homogenization, lower softening point, intolerance of burning). ③The surface treatment of the billet is not clean.

Small pits on the surface of the porcelain layer that are not burnt. There are three reasons for its formation: ①Insufficient acid washing and rinsing, and there is residual acid liquid on the iron billet. ②Excessive addition of magnesium sulfate (precautionary measures: partial replacement with sodium nitrite or sodium carbonate). ③The drying temperature of wet billet is low and the drying speed is slow.

There are no shiny or discolored spots on the surface of the porcelain layer. The reason for its formation: there are organic impurities on the blank or in the enamel slurry (precautionary measures: a small amount of general organic matter can be enamelled with potassium chlorate, gloves and woven bags may fall into the grinder and be ground into flocculent impurities. If it is not serious, it can be passed 80 mesh sieve).

Reddish brown spots on the enamel layer. The reasons are as follows: ①The soluble iron salt is not washed when the iron billet is pickled. ② Too much iron oxide is produced and dissolved during firing. ③When firing, the products block each other's heat source, and the enamel melting slows down.

Rough granular protrusions on the surface of the porcelain layer. The reasons for its formation are as follows: ①Ball stone pieces are mixed in the enamel enamel slurry. ②The enamel slurry for cast iron enamel is mixed with emery or steel shot (precautionary measures: thoroughly remove the residual sandblasting particles in the hollow cavity such as the gas stove head with small holes around it before enamelling). ③Slag from the burning furnace. ④The burnt frame has the oxide scale falling off (precautionary measures: regularly clean the transmission chain and hanging basket, and the burning frame is soaked in lime water).

Colored spots caused by enamel or smoke. There are five reasons for its formation: ①The ground coat layer has a copper head. ②The sulfur in the flue gas causes the metal in the enamel to generate sulfides such as NiS and CuS. ③Metal oxides are reduced when the enamel is melted. ④Summer white ground coat slurry is easy to crystallize after long-term storage. After the ground coat is burned, yellow spots will appear, and the cover coat will have black spots. ⑤The clay is mixed with iron sulfide slag (precautionary measures: the clay is made into a slurry, and the small golden pyrite particles can be removed through a 200-mesh sieve).

The enamel surface enamel powder layer is partially covered with enamel powder of other colors, different color spots and other traces of pollution after firing. There are seven reasons for its formation: (1) The surface enamel powder to be burned is contaminated. ②The decorative flower enamel slurry drips on the porcelain surface outside the pattern, such as spray paint dripping. ③Sweat or sugary drinks, fingerprints, and glove marks are dripping on the porcelain surface. Black fingerprints and glove marks are especially obvious on the red cast iron enamel. ④The soluble salt in the enamel slurry is enriched in the excessively thick powder layer during drying. ⑤ There is a lot of enamel on the burning rack, hanging basket, and boom (precautionary measures: regular shot blasting). ⑥The two enamel slurries are easy to contaminate each other when the internal and external enamels are separated. ⑦Improper operation of spraying multi-plate decorations, mainly because the plate is not washed in time and the pattern is deformed.

Rust stains brought by rusty tools to the surface of the finished product. There are three reasons for its formation: ① The fork and pliers are rusty. ②The plastic tools are rusty. ③The iron turnover cart is rusty (precautionary measures: the four walls of the turnover cart are covered with wooden plywood or cardboard).