Bubble lines defects are common defects in the production process of enamel products, mainly represented by linear or mesh lines composed of bubble. In general, such defects are produced in large quantities and are difficult to overcome. This problem can hardly be solved by re-glazing, repairing, etc. For the bubble lines defect, it is generally believed that during the firing process of the steel plate ground coat frit the airflow generated cannot be discharged in time due to various reasons, and when the cover coat frit firing or burning sticker, these gases out of the glaze layer and caused, slightly called silk mesh, serious called bubble lines. 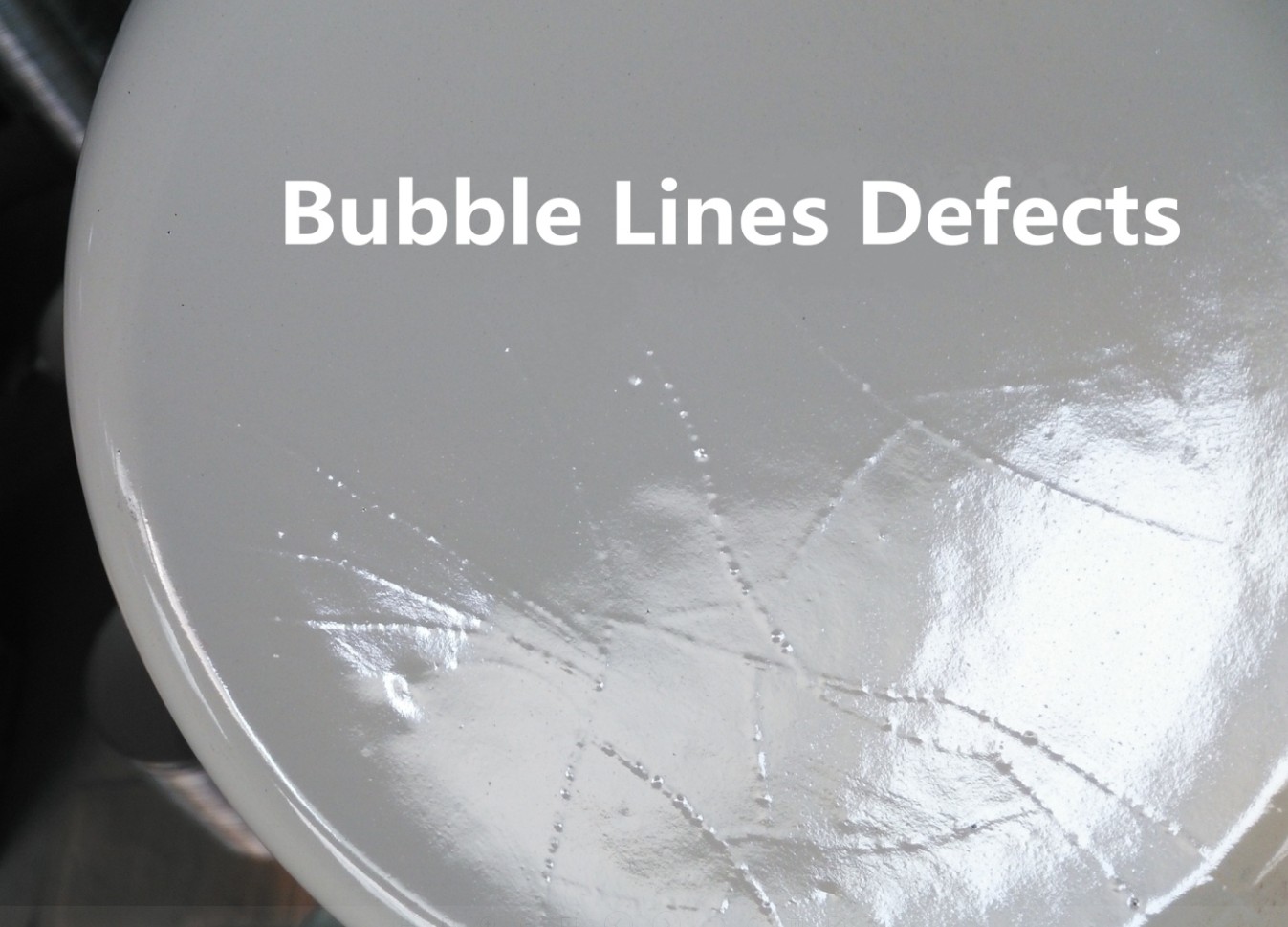 1. After the daily enamel product is fired twice (burning white frit), it appears at the bottom;

2, There is no defect after the product is fired, but it appears at the bottom or body after the third firing of the decorative stickers;

3. The semi-finished bathtub appear in the body after being placed in the second time after being stacked.

1. Pickling process: If the acidity is too strong and the temperature is too high during the pickling process, under the strong action of the acid solution, the effect of the hydrogen absorption of the blank is enhanced, and sometimes the stress is increased to cause the bubble lines defect.

3, Thermal collision and pressure: enamel bath tub and other production lines often due to semi-finished stacking caused the bubble lines in body part. This is because the products gradually form a adhesive layer in the firing furnace, and with continuous cooling and shrinkage, the stress is continuously generated, and various forces constantly work. These forces increase rapidly with time, and thus the bubble lines appears.

4. Spraying process: During the firing process of enamel products, complex physical and chemical reactions occur in the steel plate and enamel frit. This process generates a large amount of gases such as CO, CO2 and H2, once the baking temperature is too high ,the stomata will increase again. This is because, in addition to the gas that has not been discharged in the previous period, there will be new gas generation. These closed gases form a pressure at the interface as the temperature rises, resulting in the formation of bubbles under the porcelain layer. These gases continue to aggregate and grow, and the pressure is gradually increased, resulting in bubble lines.

5, The fire resistance of the ground coat frit

The fire resistance of ground coat directly determines the firing time and firing temperature of the ground coat (regardless of the effect of the thickness of the steel sheet on the firing time). If the fire resistance of the ground coat is poor, it is easy to cause the frit charred. In the actual production process, only by shortening the firing time to overcome the scorch defects, the ground coat can not be fully adhered to the steel plate, and the gas generated between the steel plate and the enamel can not escape, and is blocked in the ground coat. Defects occur when the frit is fired or burned, and such defects are usually irregular bubbles that are present at the same time as regular bubble lines. In response to this problem, many companies adjust the ratio of grinding additives (add a large amount of SiO2, Al2O3, etc.) to solve this problem.

6, The viscosity of the ground coat

Excessively high viscosity enamel frits, no matter how the process requirements are adjusted, some of the defects caused by them are almost insurmountable. In the case of bubble lines defects, when the viscosity of the ground coat is too high, the best method for melting during the firing process is to adjust the composition of the ground coat, and to improve the fluidity of the enamel during firing by appropriately reducing the viscosity of the enamel, and to improve the fluidity and gas permeability of enamel during firing, and fundamentally solve the problem of bubble lines defects.

a. If the normal enamel formula is insufficiently melted, it will also result in high viscosity of the frit, and defects such as bubbles will be generated in the firing production;

c. The ground coat is mixed with two or more different melting points and different firing ranges in a certain proportion, which can improve the firing range of the enamel and facilitate the escape of gas. This approach is now in general use;

d. The thickness of the slip is not suitable: the slip grinded too fine and the free base is too much. During the slow drying process after the coating, the alkaline salt substance can be automatically enriched in a certain area on the surface of the frit powder layer. Salts have a low melting point and a large expansion coefficient, so that cracks are likely to occur after firing (these enriched regions).

1. The most direct and effective way to solve the problem of bubble lines defects in porcelain layers is to moderately adjust the composition of the enamel frit and reduce the melt viscosity to reduce the resistance of the gas from the melt.

2, Strict control of the process conditions, to ensure that the slip has a good coating performance, the product should be handled lightly, and it is forbidden to be impacted by external force.

3. High drying temperature of the product before spraying is strictly prohibited.

4, The use of mixed ground coat and grinding plus 10% of calcined quartz powder can reduce the occurrence of bubble lines defects.